Episode 01 A Perfect Day for Bananafish
Stephen Thompson is a character that was targeted by members of Ash's Gang against his knowledge. Shortly before dying, he passes a vial of an unknown substance and utters a familiar term of "Banana Fish" to Ash Lynx, directly instigating the events of the Banana Fish plot.

An early photo shows him with somewhat copper colored hair. He kept it the same short length years later with his fringe covering the right part of his forehead. He was seen wearing suits, collared shirts and ties.

He was inquisitive wanting to learn more about Banana Fish. Mortally wounded, he focused on passing what he had gained to anyone he could.

He was the military intelligence officer at Baghdad from 2005-2007. At the time it was unclear to him if Banana Fish was the name for a person or an organisation. He did learn that it was connected with a certain drug trafficking route.

Max Lobo reports in a newspaper column that Stephen worked as a L.A insurance investigator.

After being in the military he became a freelance writer where one article read by Max Lobo noted that all rumours of Banana Fish stopped after 2007, as to why it was not in the public consciousness. He resumed progress after gaining a lead this year in Los Angeles.

Stealing the only complete sample of Banana Fish as noted by Abraham Dawson, he was targeted by Golzine who sent two of Ash’s gang members to murder him. He is wounded by one and in one of New Yorks alleyways he falls to the ground coming across street gang leader Ash Lynx. He asks Ash to help him, before telling him to take something he along with providing an address: 42 Westwood, Los Angeles. He faintly says one last thing to Ash before passing away from his injuries.

What he said is remembered by Ash when he see’s his brother Griffin, with him also having mentioned the phrase “Banana Fish”.[1]

Details of his backgrounds are provided when Ash is imprisoned. Max was planning to meet Stephen once he got out of prison having read the article he wrote on Banana Fish. Ash puts this plan to rest saying he died in front of his eyes and must have gotten too close without realising it.[2]

Coming across Ash by chance, Stephen requests help from him after being stabbed. He transfers the complete sample of Banana Fish to him as well as providing a lead in the form of an address.

Though not seen interacting, he was targeted for death by the mob boss. 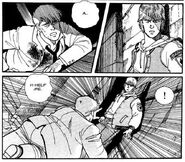 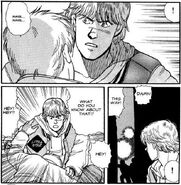 Retrieved from "https://banana-fish.fandom.com/wiki/Stephen_Thompson?oldid=28783"
Community content is available under CC-BY-SA unless otherwise noted.