Miyu Tomita
Michael Glenreed is the son of Max Lobo and Jessica Randy.

Michael has brown hair and blue eyes like his father. He is seen wearing a red shirt with a teddy bear on it.

He is a kind-natured young boy who loves his parents deeply. He is exceptionally happy upon seeing his father again after a long separation.

Michael has been living with his mother in Los Angeles since his parents' divorce.

Despite living apart, Michael and his father are close, and Michael is excited to see Max again when the latter returns home.

Though they first meet when Ash visits his home in Los Angeles, two quickly grow close. Both are annoyed when Jessica and Max argue, and Ash later calms and comforts Michael after he is traumatized by his mother's rape. In "Garden of Light," the teenage Michael considers Ash to be his hero.

They meet when Eiji visits Jessica's home. In "Garden of Light," Michael offers to help Eiji prepare for his photo exhibition.

They are introduced by Eiji because of their similar ages, and Michael tells Akira about Ash. 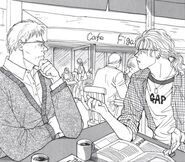 Retrieved from "https://banana-fish.fandom.com/wiki/Michael?oldid=34139"
Community content is available under CC-BY-SA unless otherwise noted.