The MAPPA Showcase was a touring expo in early 2019 promoting five recent, current, and upcoming works by the Japanese animation studio MAPPA, creators of the 2018 Banana Fish anime.

The showcase ran for two and a half weeks in Ikebukuro, Tokyo, and a week and a half in Tenjin, Fukuoka, before returning for a three-week rerun in Tokyo. Each time the showcase was hosted in exhibition space inside of the PARCO department store. Tickets were 500 yen apiece and came in five designs, and ticketholders had the options of choosing the series displayed on their ticket and buying a bonus keychain to match their ticket for an additional 500 yen. At the showcase entrance was a timeline of the studio's works up until early 2019, and at the exit was a small pop-up shop exclusively for attendees, though the merchandise available varied by venue.

The first zone in the showcase featured Zombieland Saga, which ran from October to December 2018, airing its last episode on the same day as Banana Fish. The zone displayed large cardboard cutouts of several main characters, a portion of a classroom set that included a chalkboard, clothing, and a stuffed animal, and a wall covered in animation lineart.

The second zone in the showcase featured the then-ongoing series Dororo. The room displayed large prints of studio artwork on three walls, lineart and animators' notes, and a large screen played footage of the drawing process of several characters and demons from the series. Three of the studio artwork pieces were available as prints in the pop-up shop at the showcase exit, as was a set of clear files depicting animation drafts.

The third zone featured the then-ongoing series Kakegurui ××, sequel to Kakeguri - Compulsive Gambler. It featured several walls covered in studio lineart and artwork, a television screen playing the anime opening and ending themes and second season trailer, and in the farthest room, a billiards table with a replica of the cards and tokens used in the first episode game of rock-paper-scissors.

The zone dedicated to Banana Fish featured a replica of Ash's gun enclosed in glass. The walls were covered in animation lineart and staff notes for the opening and ending animation and several scenes in early episodes of the show. Several studio-drawn prints were on display, and a large screen on one wall showed a sped-up animation process for several background scenes from the anime in between playing the opening and ending themes. In the pop-up shop at the showcase exit, a set of key holders and two clear file sets were for sale.

The final zone, showcasing the series Yuri!!! on Ice, opened with a television screen playing the opening and ending themes and trailer on repeat. Inside the room were three larger-than-life character statues, replicas of skating outfits on spinning pedestals, and walls minimally covered in animation sketches, posters, and a large gold foil print. At the exit was a poster for the series' upcoming film, at the time scheduled to be released in 2019, though since delayed. The pop-up shop outside sold a poster of the two main characters as well as the Yuri!!! on Ice art book at a slightly discounted price.

Poster for the Tokyo showcase

Poster for the Fukuoka showcase

Poster for the Tokyo showcase rerun 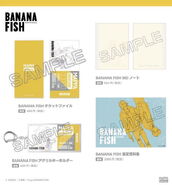 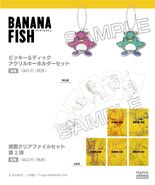 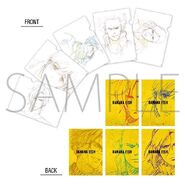 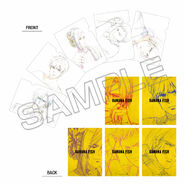 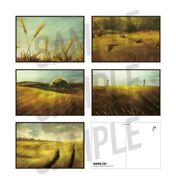 Print set on display in the Banana Fish zone
Add a photo to this gallery
Retrieved from "https://banana-fish.fandom.com/wiki/MAPPA_Showcase?oldid=31891"
Community content is available under CC-BY-SA unless otherwise noted.