Takahiro Sumi
Kong is a Lieutenant in Ash's gang assigned to protect Eiji in Banana Fish.

Kong has somewhat of a mohawk based hair style with the sides of his head shaved. He is quite large and wears a tan yellow tank top and a chain around his neck. His trousers are supported by striped red and white suspenders.

He has a gentle disposition, works well with others especially Bones and acts an effective guard for Eiji.

Unstated though he came to join Ash's gang

Kong is amongst many other members of Ash's gang as he oversees Ash administer punishment to two members of his gang for acting behind his back. As with the rest, Kong remains silent as Ash spares them before sharing words with Arthur then leaving with Ash.

Kong is a part of Ash's gang and is loyal enough to be trusted to be a guard for Eiji. Though fearful of Ash's side when he was angered, Kong came to be at ease around his gang leader such as at a Halloween party.

He is assigned to guard Eiji on Ash's orders.

Kong is usually seen with Bones and they get along well. 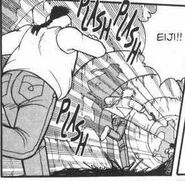 Retrieved from "https://banana-fish.fandom.com/wiki/Kong?oldid=34071"
Community content is available under CC-BY-SA unless otherwise noted.