Jack is a minor character who helps kidnap Skip as part of Arthur's plan in the Banana Fish story.

He has relatively long reddish brown hair of which the fringe reached down near his eyes and same colored eyebrows. There are two visible silver ring piercings on his head area, namely his left earlobe and lower lip on the left side. Physically he has an aquiline nose, and wears a moss green collared jacket over a blue shirt.

Not much is shown aside from that he was willing to kidnap a child in Skip and collaborate in Wookie's and Arthur's plan for Ash.

Whilst nothing is stated of Jack's history he came to join Arthur's side when he plotted and carried out actions against Ash.

After the bar Ash and his gang frequented is raided by Arthur's men, Jack is one of three people who succeed in their true plan of kidnapping Skip. Eiji is also brought along as well who Jack sits beside as Wookie absconds in the vehicle he is driving.

Unknown to him, Jack is targeted by Ash and his gun and is instantly killed when he is shot in the back of the head through the car's rear window.

Whether he was chosen as part of the group to be in the getaway vehicle or happened to be there to help get the target of the kidnap in, Jack was entrusted with this task by Wookie. For his part, Wookie did not appear too concerned that Jack had just died, though Ash was pursuing them on a motorbike as it happened.

Likely not knowing or being aware of him prior to events, Jack still sat beside him not concerned there was an innocent bystander caught in the kidnap of Skip. 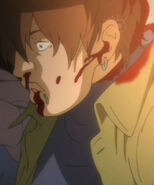 Retrieved from "https://banana-fish.fandom.com/wiki/Jack?oldid=27970"
Community content is available under CC-BY-SA unless otherwise noted.