Takashi Matsuyama (ep. 2 and 4)
Kenjiro Tsuda (ep. 3)
Garvey is one of the prison members that met Ash Lynx when he was framed for a murder Ash did not commit. Garvey was hired by Dino Golzine.

In the anime, Garvey has a pronounced square chin and short brown hair shaped into a small mohawk.

In the manga, Garvey, like the common supporting characters, is an old man with the thick moustache.

He is affiliated with Golzine enough to be called upon whilst serving time in prison for an unstated crime.

In the prison cafeteria he invites himself to Ash's table, suggests that he joins him in his cell where they can be good friends. For these efforts and after touching Ash's hand Garvey has a serving tray battered over his head before being immediately kicked across the face by Ash. 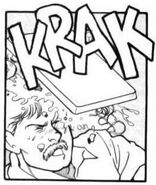 Retrieved from "https://banana-fish.fandom.com/wiki/Garvey?oldid=31894"
Community content is available under CC-BY-SA unless otherwise noted.