Yoshimasa Hosoya
Frederick Arthur is a vindictive and cruel ex-member of Ash's street gang, who allies himself with Golzine to usurp Ash. He was later stabbed by Ash Lynx to during a fight in Banana Fish.

Arthur is a tall man with blond hair that he keeps swept out of his face, showing his forehead and ears. He has thin eyebrows and narrow blue eyes and pronounced cheekbones.

He wears a black shirt underneath a long-sleeved green jacket with a raised collar covering his neck. His beige trousers were kept in place with a dark belt. He also wears black boots with grey soles that go up to his shins.

He demonstrates a particularly cruel streak firmly set on revenge and willing to kidnap to attain it. Another sizeable aspect of his personality is his deference to whatever Golzine asks of him, making him one of Golzine's most trusted men. He will resort to any means necessary including betrayal to achieve his goals.

Arthur decided to fight Ash Lynx for control over their territory and to become a gang leader, resulting in Ash slicing his fingers. This incident cost him the ability to hold a gun and instead uses his knives to fight.

According to Shorter Wong, Arthur begged to be taken in, going as far as to lick Golzine's feet.

Arthur stands to the right of Wookie as he and other gathered gang members oversee their boss, Ash Lynx fire bullets against the wall behind two gang members who followed Golzine over him.

When he hears from Ash that they are no dogs of the mafia and deal with Golzine as equals, he out of everyone is spoken to by Ash to confirm that is the case. Eyes closed, he merely remarks that Ash is the boss and watches as he leaves. Wookie moves closer and he mutters to him whether he thinks Ash is onto something. Using profanity, he tells Wookie that Ash missed the gang members on purpose when he thinks he missed, though just close enough to nick their skin. As he walks, he explains to Wookie that one must play dirty if Ash is to beat. Stopping to contemplate his hand, Arthur announces he has got to pay Ash back for his scarred fingers.

He is in Golzine’s manor where he approaches Marvin to tell him to take it easy after his annoyance with what Ash said to him. Asked what he is doing there and looking to the back of Ash as he leaves, Arthur tells Marvin he has an offer for him and is sure he will like it.[2]

One of the few people in close cohorts with Arthur. Though he belittles him for not being able to recognize the true intent of people, such as when Ash purposely missed with his bullets, Arthur does count on him to carry out his plans.

He aspires to take Ash's place as gang leader though largely nurtures a vendetta against Ash for what he did to his fingers. Arthur is willing to kidnap Ash's friends, break gang conduct to fighting with Ash with knives with the intent to kill to fulfill a deeply held sense of vengeance.

He comes to take orders from Golzine to acquire power for himself and enact vengeance against Ash. He is one of Golzine's most trusted men and is introduced by him to prominent members of the American government.

Arthur likes to refer to Eiji as "Samurai Boy." He sees him first when Eiji brought along in a kidnapping and orders him shot to force Ash to drop his gun. He targets him for kidnap perceiving Eiji alone as Ash's weakness.

Targeting Skip for kidnap, he regards him as a way to lure Ash into a trap. 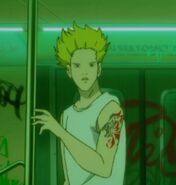 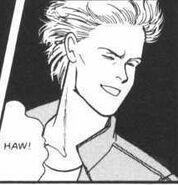 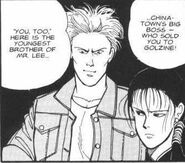 Retrieved from "https://banana-fish.fandom.com/wiki/Frederick_Arthur?oldid=33624"
Community content is available under CC-BY-SA unless otherwise noted.