Kenta Miyake
Cain Blood is a character in the Banana Fish series, as well as the leader of Black Sabbath, an African American gang that controls Harlem. Though initially neutral, he later allies with Ash in his battles against Arthur and Golzine.

Cain is a black African American man, seemingly an older teen or young adult. He has dark, short curly hair that is shaved around the sides, and he has tattoos on his right arm and the right side of his chest, but these tattoos are often not visible. He wears a ripped jean shirt with no sleeves and a popped collar, along with gold stud earrings and black sunglasses.

As the leader of Black Sabbath, Cain appears to be highly defensive and is very outspoken, but this does not keep him from remaining confident and cool; rather, it gives him a sense of protective warmth that the other gang leaders lack.

Ash first approaches Cain to request he remain neutral in his fight with Arthur. Because Ash came alone, he earned Cain's respect. Later on, the two team up with Sing (the Chinese's boss) against Dino. Cain and Ash are shown to be friends. He expresses concern for Ash's injures (after he is rescued from Colonel Foxx) and asks Ash to let him see them. Ash (still shaken) refuses and hits Cain's hand away, and then immediately apologizes.

He rates Arthur lesser than Ash on account that he came with his subordinates to interact with him whilst Ash came alone.

Cain first meets Sing during Ash's and Arthur's "duel" and asks Sing if he is Ash's fan. The two of them work with Ash to fight against Dino.

He fights against mob boss Golzine taking part in the planned event to capture him. 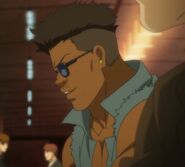 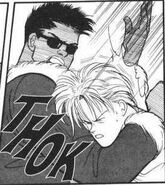 Retrieved from "https://banana-fish.fandom.com/wiki/Cain_Blood?oldid=34019"
Community content is available under CC-BY-SA unless otherwise noted.