Toshiyuki Morikawa
Blanca, real name Sergei Varishikov, is a a character in Banana Fish. He is a Kazakh professional assassin. Even though he cares for Ash Lynx, Blanca is a highly effective killer who dutifully carries out any contract he is hired for such as when he is hired by Yut-Lung to murder Eiji Okumura. Ultimately declining to, Blanca instead defects to Ash's gang.

Blanca is a handsome man with shoulder-length dark brown hair that is pulled back in a low ponytail. He has thin eyebrows and narrow eyes. Amongst his clothing attire, Blanca opts for a beige suit and fedora. He also seems to wear thin framed silver glasses at times. He is noted by Sing Soo-Ling as an extremely tall man and with a muscular build.

Blanca is for the most part a serious and level-headed individual, but not necessarily stoic. Contrasting with his otherwise colder traits is a smile that he shows often along with having a penchant for jokes.

Like Ash Lynx, Blanca admits that he is a person who did not know love and he was raised only given tasks and the means to accomplish them. He was however able to find someone who loved him and love in turn. This allows Blanca to feel compassion and kindness to those he is close to, namely Ash and Yut-Lung and shows concern for both in his own way, given that their backgrounds are similar.

Blanca entered Moscow University at eighteen years old and after graduating he joined Spetsnaz after undergoing military service of which he was on the road to becoming a top elite of the military. As a former KGB lieutenant he defected from the Soviet Union after his wife Natasha Karsavina, who was a political dissenter, was murdered. His nickname, Blanca, comes from his wife's nickname, who was from Belarus.

Prior to the events of the series, he was employed by Dino Golzine to train Ash Lynx to become the latter's heir. He subsequently retired to the Caribbean but is called out of retirement by Golzine to capture Ash.

Natasha is Blanca's wife from the Republic of Kazakhstan of the Soviet Union. He received his code name of "Blanca" from her and abandoned his post when he suspected she was targeted and killed in what was reported as a terrorist attack.

Blanca was hired by Golzine as Ash's tutor and has amicable interactions with Golzine. His services were requested by Golzine again of which Blanca came out of retirement to carry out where he also helped explain to Golzine Ash's strategies. He speaks candidly to the mob boss such as at the end of Blanca's contract with Golzine, he makes it no secret and shares that he has accepted a contract from Yut-Lung.

Blanca signs a contract with Yut-Lung to be his bodyguard and to protect him from threats such as Ash. He carried out his duties professionally defending Yut from harm but does not attack Ash or Eiji directly under the pretext of defending Yut. The suspicion that Blanca allowed himself to be hired on purpose to in fact defend Ash strains their relationship and ultimately causes Blanca to request the contract be severed. This is not before Blanca provides some parting words of advice to Yut meant to help him.

While Ash was young, he became his mentor, he taught him everything he knows from marksmanship, espionage, counter-espionage, fighting, et cetera. Blanca views Ash as family. At first he encouraged Ash to return to Golzine, believing him to have everything he could want there. Swayed by Ash's remarks to not want a fake life, Blanca would come to see how important Eiji is to Ash when he asked to not harm Eiji. Because of this, Blanca would later defect from his new employer to join Ash where he bandages his wounds and takes him to see Eiji before fighting alongside him. This was most likely done because Blanca was reminded of himself and his late wife through Ash and Eiji and wanted Ash to have the chance to say good-bye to the one he cares about most which was something Blanca did not get.

Blanca targets Eiji by using a rifle that only left a graze on Eiji's shoulder. He later uses Eiji as a hostage in order to get Yut-Lung back and apologizes to him for the wounds. In time, Blanca would see the kind of effect Eiji would have on Ash and sees why Ash cares for him so greatly.

He first met Sing while visiting Yut-Lung by the doorstep when an unexpected assassin appears and begins to shoot at Blanca and Sing. The two were able to stop the assassin only to find out that he swallowed a tablet to cause his own death. Blanca provides back up for Sing when Yut-Lung asks him to leave, with Blanca responding to Yut-Lung saying that he helped stop the killer, too. The two eventually team up again in the final battle with Colonel Foxx, and Blanca replies on Sing to sit in front of him as he uses Sing as an arm shoulder for his rifle for greater accuracy.

Being a former Russian operative since his early teen years, Blanca is an expert in the arts of assassination, firearms, close combats and any technique associated with the profession. Being Ash's mentor he has taught the teen boy everything he knows from marksmanship, hand to hand combat, assessment situation and even multiple forms of torture designed not to kill.

His skill is such that Ash admitted that he could not defeat Blanca as he was, and this is proven to an extent when Blanca gives Ash a severe beating on their first meeting in years. The battle at the Museum, however, suggests that Ash can indeed give even his mentor a tough time on his home turf.

By far Blanca's most powerful skill is that in his sniping ability, as he can shoot far beyond the range of an average sniper. He can even perfectly snipe the man piloting a helicopter to bring that down in a single shot despite unfavorable conditions, such as excessive wind. 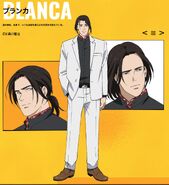 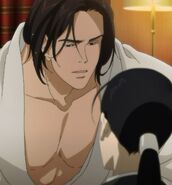 Retrieved from "https://banana-fish.fandom.com/wiki/Blanca?oldid=33653"
Community content is available under CC-BY-SA unless otherwise noted.